Puerh tea is pure in origin and pure in taste. It is named after a town called Puerh in central Yunnan at the furthest south western part of China and comes in a myriad of forms, loose tea, round cakes, rectangular bricks, the inverted birds nest mini tuocha and is even pressed into lengths of bamboo!

The method of producing raw puerh today differs very little from centuries ago. The tea was pressed into cakes or bricks and then wrapped in bamboo leaves in a set or seven, ( seven is considered a lucky number and it was the wish for fathers to have seven sons), for ease of transportation in the olden days along the ancient tea horse routes.

There are two types of puerh tea, raw (sheng) and ripe (shu). Many people think that ripe puerh has hundreds of years of history, but this is not so! Puerh made before the 1970’s was made from green tea and aged naturally. Centuries ago, sometime during the Tang dynasty (AD 618 -907) merchants began to trade the tea. Because of the time it took to reach its destination, Tibet, India or Beijing, it had changed. It changed colour from green to brown and became richer and smoother in taste. During the months of travel, the long distances and the difficult terrain, the tea underwent a fermentation process, whereby microbes acted on the tea causing biological and enzymatic changes. The resulting tea became know to the Chinese as aged puerh and was highly sought after by royalty, high officials and tea connoisseurs. In the mid 1970’s a process to accelerate the ageing process was invented in the Kunming factory by tea master, Wu Qijing. This saw the start of the popularity of ripe puerh at first in China and then around the world.

The highest quality Puerh tea cakes come from the high mountains in Yunnan. The one bud and two whole large leaves are handpicked from ancient wild arbour trees at high altitudes where the rich organic soil, climate and cool nights produce a tea of exceptional quality. 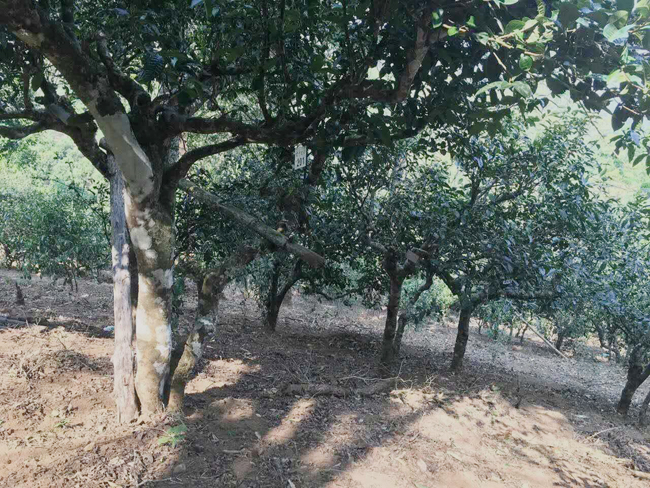 The leaves are picked during the middle of the day when the morning dew has evaporated and some sun has been on the leaves. After picking, the leaves are carried in a bamboo basket (to allow ventilation) and sorted, are then pan roasted for 5-10 minutes and then rolled for 15-20 minutes. After rolling the leaves are sun dried for half a day, less in summer, and are then ready to be pressed. Before pressing in stone moulds the leaves are weighed then steamed to prevent them from breaking in the moulds. Nowadays, the cakes are pressed manually (by feet) and the bricks use a machine press. The steamed leaves are placed in a square of muslin and pressed. After pressing they are placed on racks and air dried. It normally takes one day to dry the raw cakes and up to three days for the ripe cakes.

As there is no harvest between November and March, the farmers use this time to prune and weed  around the trees. They climb the trees to cut off surplus branches which are then piled around the trees to provide a natural fertiliser when rotted. These ancient trees, some are 1000 years old, produce a tea that is pure in origin and taste. In general the tea from 300 plus year old trees produce a tea which is mild, sweet and rich in aroma, the younger the tree the fresher the taste.

Puerh teas improve with age like wine. The puerh tea taste gets better with each year, developing more mellow complex flavours. The main difference between raw and ripe puerh is the post fermentation. Raw puerh ferments naturally and does not go through the post fermentation process. Ripe puerh is subjected to controlled levels of humidity and heat to hasten the maturation of the tea.

As well as being pure in taste, Puerh teas have a lot of medical lore attached to them. In China, they are considered to help to lower cholesterol, fight hangovers, induce sleep and aid digestion, which is why they are frequently drunk during mealtimes.

High quality puerh is in short supply as it is hoarded by tea connoisseurs in China and Asia. It is a secret, pure pleasure yet to be discovered by countries outside Asia. Why not try some today????