The history of drinking tea is centuries old. Yet it is still not clear if the Buddha actually partook of this healthy beverage. An intriguing question.

Here we explore a few facts ….

A contemporary of Pythagoras and Confucius, the Buddha lived in India in 500 BC whereas Confucius lived in ancient China, around 551-479BC.

China is believed to be the place where tea was first planted. According to Chinese legend, the Divine Cultivator, Shennung accidentally discovered tea in approximately 2737 BC. However, tea drinking did not spread widely until the 5th Century.

Documented evidence of tea drinking in India dates back to 750 BC. Legend tells us that tea drinking in India began with a saintly Buddhist monk almost 2000 years ago. This monk later became the founder on Zen Buddhism. According to the legend he decided to spend 7 sleepless years contemplating the life and teachings of Buddha. While he was in the 5th year of meditation he almost fell asleep so he took some leaves from a nearby bush and started chewing them. These leaves from the tea plant revived him and he was able to complete his 7 years. This legend took place before the Buddha lived in India.

Yunnan, in China, on the border with Tibet and Burma is the birthplace of the wild tea plant, and Sichuan, where it was first cultivated is on the route from China to India. For thousands of years there was an ancient road which was used to transport tea and other commodities from China into Tibet and India. These Ancient Tea-Horse roads, as they became known, are a minimum of 1800 to 200 years old and were used to transport Pu erh tea into India.

Confucius originated in Shandong and travelling from kingdom to kingdom with top statesmen, along these Tea-Horse roads, would most likely have drunk green tea or Pu erh tea with them. At this time China was made up of several kingdoms before it became unified in 221BC. Confucius was advisor to various Kings and dealt with the Dukes and Viscounts who were the local rulers of the kingdoms. Pu erh tea was traditionally given as a feudal payment (Tributary) to Kings and as Confucius dealt with these statesmen he would have sipped tea with them as part of his daily life.

Interestingly, even in more recent times, the GONG TING (Seven Son) Imperial Palace Pu erh tea cake was so highly prized that it was carefully selected to present to the palace to serve the king and his family. It was the Tributary Tea of the local people to the palace. And today Pu erh tea is so highly regarded that it has been designated as origin protected by the Chinese government.

Confucius is now considered to the the greatest philosopher in ancient Chinese history.  Confucianism had a great impact on Chinese tea culture and was the starting point for the ancient Chinese tea ceremony based on the four principles of harmony, etiquette, optimism and calmness.

So it is noted that Confucius was a consumer of tea, but what about the Buddha?

It is likely that China’s nationwide adoption of the tea habit was associated with the spread of Buddhism and Buddhists adapted tea to the needs of their religion.  But as it was such an expensive commodity it is unlikely that the Buddhist monks would have been given tea in their begging bowls.

At the time of Buddha, tea could only be afforded by kings and nobles because it was so expensive. The Buddha himself had many noble kingly friends with whom he socialised so it is possible that he was invited to drink tea with them.

Tea was certainly around at the time of the Buddha, but whereas it has been noted that Confucius liked to drink tea with the Emperors, we have no such evidence that the Buddha drank tea with his noble friends. 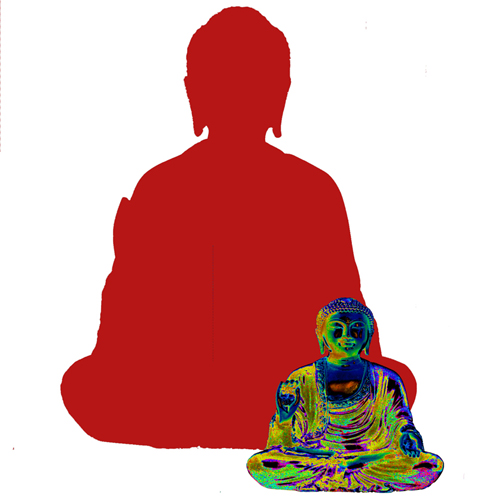 Tea for thought. You make up your own mind. Did the Buddha drink tea?